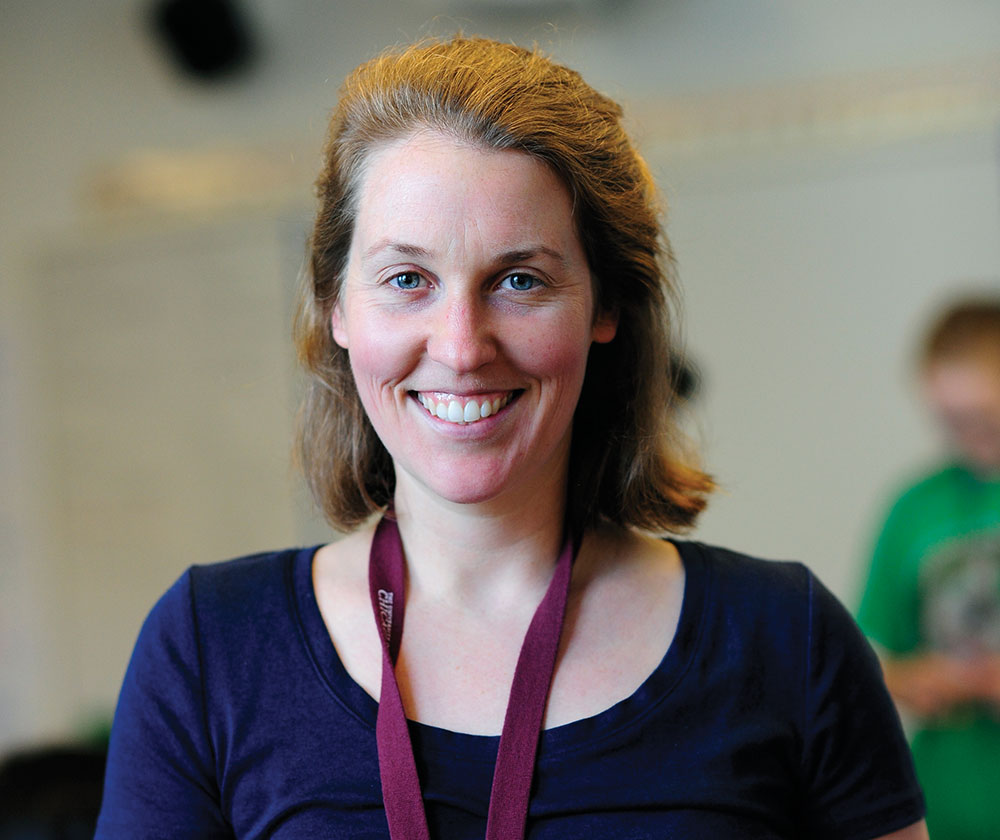 As an undergraduate at Ohio State, Ms. Hanzlik thought she wanted to major in math. “I loved calculus in high school. But once I started taking theoretical math classes, I realized what I really like about math was the way it can be used to model the physical world.” That’s physics, so she soon switched majors.

She also studied French, following an intensive study abroad summer program in which she fell in love with the language and the country.

When she started graduate school at Oxford in 2008, she studied particle physics, intending to earn a PhD. But after realizing during her first year that she enjoyed solving physics problems more than research, she decided to return home and teach. So she earned her master’s and studied comparative social policy.

Comparative social policy, Ms. Hanzlik explains, looks at the interplay of choices governments make in the developed world and how different countries allocate resources differently. “We think about health care, education, unemployment, and how the allocation of resources represents the underlying ideology of a particular government,” she says. “I thought studying that field would give me a bird’s eye view of how education fits into policy more broadly.”

Coming from a family of teachers—parents and grandparents—Ms. Hanzlik had wanted to be a teacher for a long time. After returning from Oxford, she started with Teach for America in the greater Chicago area and later worked at an area charter school.

In June 2014, Ms. Hanzlik joined Lab, teaching seventh grade math before transitioning to eighth grade science and then to assistant principal in 2019. Her expertise in both physics and math gave her an edge, particularly with the eighth grade car project. Students design and build a car—using a wooden frame, circuits, and two batteries—capable of moving forward and backward and flashing its headlights, with each unit connected to topics being studied at the time in science. Moving the project from the sixth to the eighth grade gives students two more years of math experience.

Having taught math so recently helps Ms. Hanzlik make clear connections between what her students have already learned and the skills they learn through the car project. They also can’t “pretend they’ve never learned about slope,” she jokes.

Ms. Hanzlik is also active at Lab outside the classroom. “We’ve got such a depth of knowledge among the teachers, and they share that through the clubs we offer,” she says. “The programs are unmatched.” Coaching the robotics club, science Olympiad, and the math team, she made use of both her science and social policy backgrounds.

It’s easy to see how she uses math and physics; social policy came into play through her efforts to increase diversity in the clubs. She had a particular interest in achieving gender parity in STEM fields but also worked toward racial and socioeconomic equity. Ms. Hanzlik personally encouraged students who weren’t aware of such clubs or didn’t think the clubs would be “culturally the right fit for them.”

“I’m aware of how important personal connections are in addressing those issues at the middle school level,” she says. “The whole Middle School team works hard to encourage all of our kids to take advantage of opportunities, and I think if we didn’t, we would struggle more with equity.”

She benefited from such encouragement herself: She may not have become a Rhodes Scholar had it not been for her mentors, she says, who brought the program to her attention. “It’s important in terms of equity that people take an active role in reaching out to underrepresented groups,” says Ms. Hanzlik. “Often those groups are just not aware of the resources that exist.”

The math and science Olympiad clubs now have equal gender participation, thanks to these efforts. The robotics club—currently at about 60–70 percent male participation—still has a bit further to go, but Ms. Hanzlik is confident she and her colleagues can close the gap.