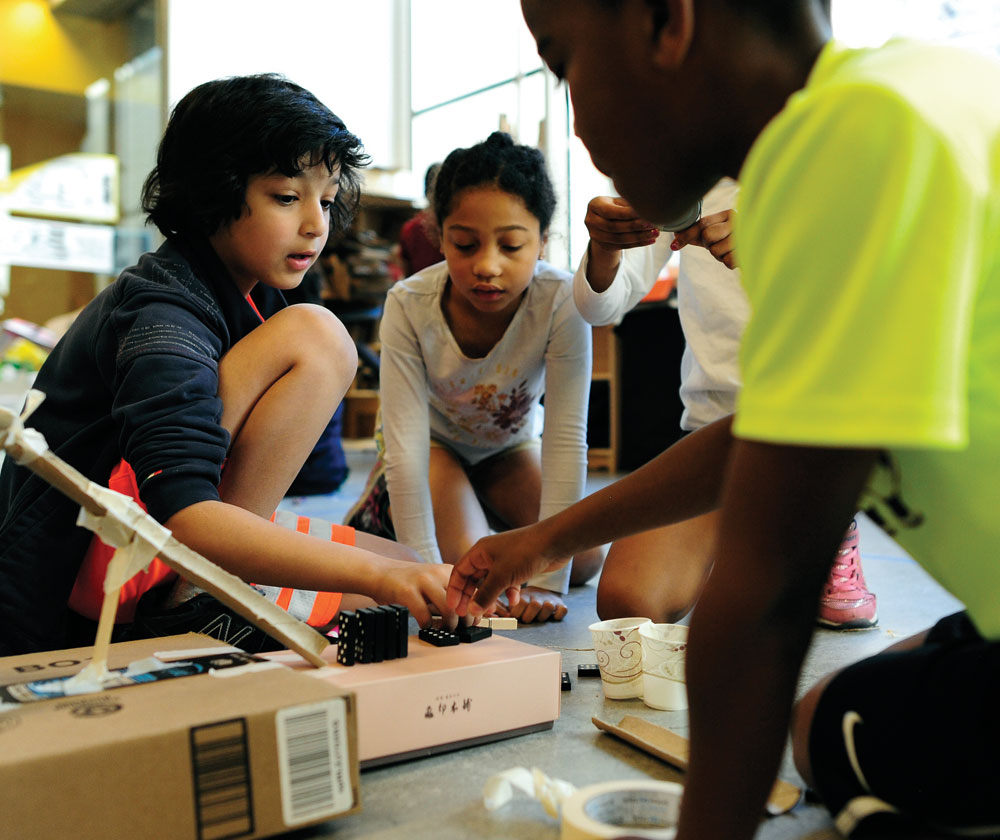 Mr. Calleri—a biologist with a background in contracting—endeavors to steer his students away from “throw-away culture.”

“Our taxidermy may not be perfect…but if we stuff a piranha or mount an opossum skull rather than tossing
them in the trash…well, I’ve done something more than just show my students a picture.”

John and Alice Dewey would agree. They founded Lab in 1896 to breathe life into his ideas about rational empiricism: learning is sensory, learning is experimental. Today Dewey’s beliefs are alive and well, as Lab educators across all levels and disciplines employ project-based curricula. Now, with makerspaces available to Lower, Middle, and High School students, Labbies can follow their imaginations even further.

“I always hesitate with the term ‘makerspace,’” says Mr. Calleri. “Some of us never stopped making things. The DIY movement didn’t begin recently. It’s always been there.”

Nomenclature aside, the High School now has a space filled with saws, hammers, drills, band saws, a spindle sander, a bench grinder, and other intimidating pieces of equipment that teachers like Mr. Calleri can’t wait to get into their students’ hands. Possible upcoming projects include tabletop 3D phylogenetic trees and avant-garde beehives.

“I look at objects and I question their design. I think about how I can improve them. Take those beehives,” says Mr. Calleri, who is also Lab’s head beekeeper. “Modern beehives were designed to best facilitate human needs: to create as much honey as quickly as possible to turn a profit. But what design is actually best for the bees? My students can research that, and thanks to the new work space, they can build new hives here.”

Not that craftsmanship is new to Mr. Calleri’s classroom. One student constructed and mounted the skeleton of a black-throated monitor—a large lizard in the same genus as the Komodo dragon—for her independent study project. (“I used the monitor’s hide to make pocket protectors,” Mr. Calleri reports. “Nothing goes to waste around here.”) Another saw that an old human skeleton in the classroom was missing two bones, and he used a 3D printer to create replacements.

Mr. Calleri hopes that bringing these new work spaces to Lab will inspire some students to follow career paths that involve making—or at the very least, to increase their marketable skills.

“It’s a complaint I hear from college professors all the time: ‘Yeah, this kid looks great on paper, but they can’t actually do anything,’” Mr. Calleri says. “These are universal skills. Planning, measuring, list-making…everyone does that to a degree. Even if you’re a lawyer, you still need to gather everything you need, organize it, make sure it’s all there and ready to go.”

Another possibility on the horizon: A periodic Saturday when people can bring in broken items—toasters, coffee pots, lamps—and see if they can be repaired in the makerspace.

“You can shout ‘go green’ all you want,” he says. “But if you’re not encouraging [students to repair things], you’re missing a big component of that.” 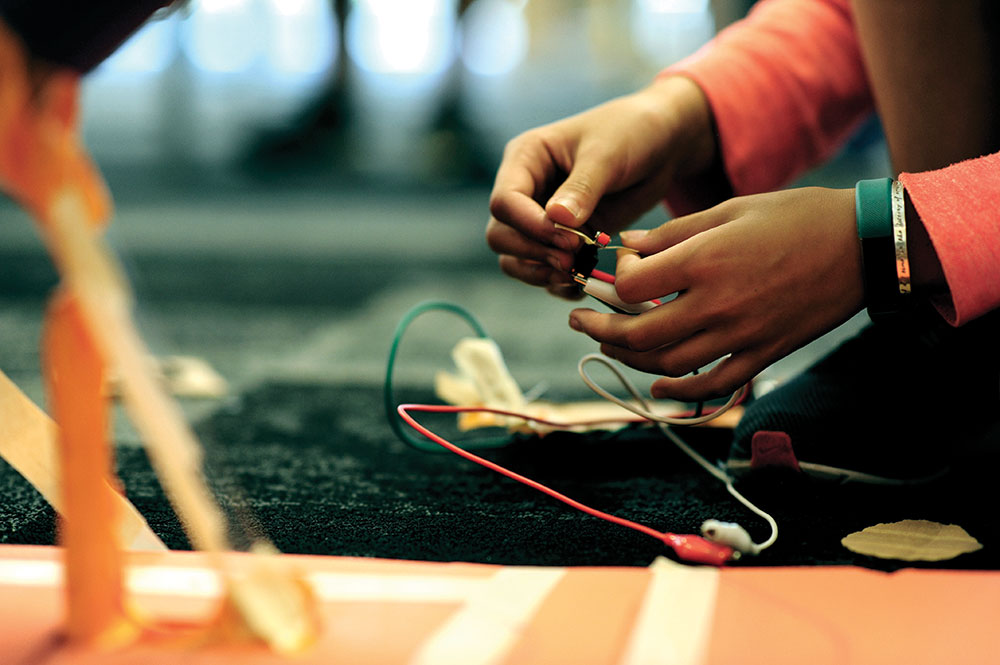 Engineering
“I tell students that lots of people in their lives will help them prepare for a test,” says eighth-grade science teacher Michael Wong. “Lab students should also be prepared to fix a flashlight and engineer their way out of a problem when the power goes out.”

Like Mr. Calleri, Mr. Wong has always been a proponent of project-based learning. The opening of the new makerspaces, however, will take the realm of creative possibilities to a higher echelon.

“In eighth grade, we do a number of different engineering challenges, and we teach basic building skills,” Mr. Wong says. “And every year, each student builds their own car.” From scratch.

At the beginning of the school year, each student was given a list of 43 instructions to mark off as they go, links to 41 instructional videos (each of which was filmed by Mr. Wong and his students last year), and some safety guidelines. From there, they are given materials and classroom time to build the foot-long cars themselves. Currently, the classroom doubles as a workshop, but with the advent of the makerspace, things may change.

Upon completion, the electric cars must be able to move forward and backward and have working headlights. But the beauty is in the details, and the aesthetic differences in the cars are where the students’ personalities really shine through.

“The creativity of the designs is really something to be judged by each individual student and what they were trying to emulate,” Mr. Wong says. “What is creative to one person may be viewed as cutting corners and just making a really small car to someone else.” 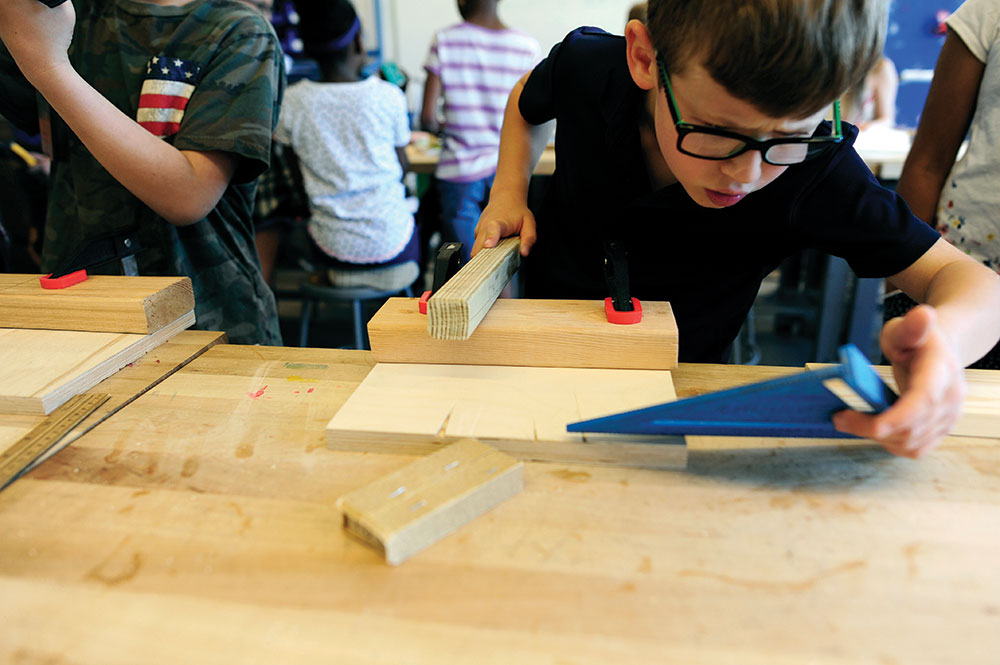 Math
“I think the ‘M’ often gets forgotten in ‘STEM,’” says High School math teacher Julia Maguire. “People just think of math as paper and pencil, solving problems…but to me, math is much deeper and more beautiful than that. Making anything, building anything is all a big math problem.”

To help prove this point—and in hopes of fostering a love of math in younger children—Ms. Maguire teamed up with fifth-grade teachers Di Bloom, Kristin Frank, and Stephanie Mitzenmacher, and Di Bloom to help them bring some of their ideas into the makerspace…and what’s more brilliant than giant Jenga?

Ms. Mitzenmacher and Ms. Bloom’s students started with a standard-sized Jenga, recorded all the measurements and dimensions, and calculated how to blow them up. Then, Ms. Maguire led students to the makerspace, where they sawed and sanded the 2x4s themselves.

Ms. Frank sought a project that could help her students visualize the calculation of area to volume, so she enlisted the help of the art department. Her students were separated into groups, then told to select from a variety of prints of famous paintings. The challenge: create a likeness of the 2D paintings in 3D form.

“We asked the students to think as much about what they don’t see when they look at the painting as what they do see,” Ms. Maguire explains. “What’s behind the chair? What’s in the box? What’s on the bookshelf?”

The answers to those questions would drive the students’ designs. With their rough sketches in hand, they headed to the makerspace. With the help of a representative from Bitspace—the company Lab contracted to help the school design and build the makerspaces—prototypes were made, critiques were delivered, revisions were made…and finally, 3D art was created.

Next up? Building scale models of Lab’s outdoor classroom.

“One of the things we’ve really worked on this year in fifth grade is to get the kids out and measuring things,” Ms. Maguire says. “It sounds so simple, but it really teaches a lot of skills. They need to find the right tool to measure each object. They need to think about things from every angle…you can’t make the pond this big if that tree is this size, etc. These are skills utilized by architects, contractors…in any number of professions.”

Perhaps Ms. Maguire has answered the question students have asked in classrooms for generations: “When are we ever going to use this stuff?”