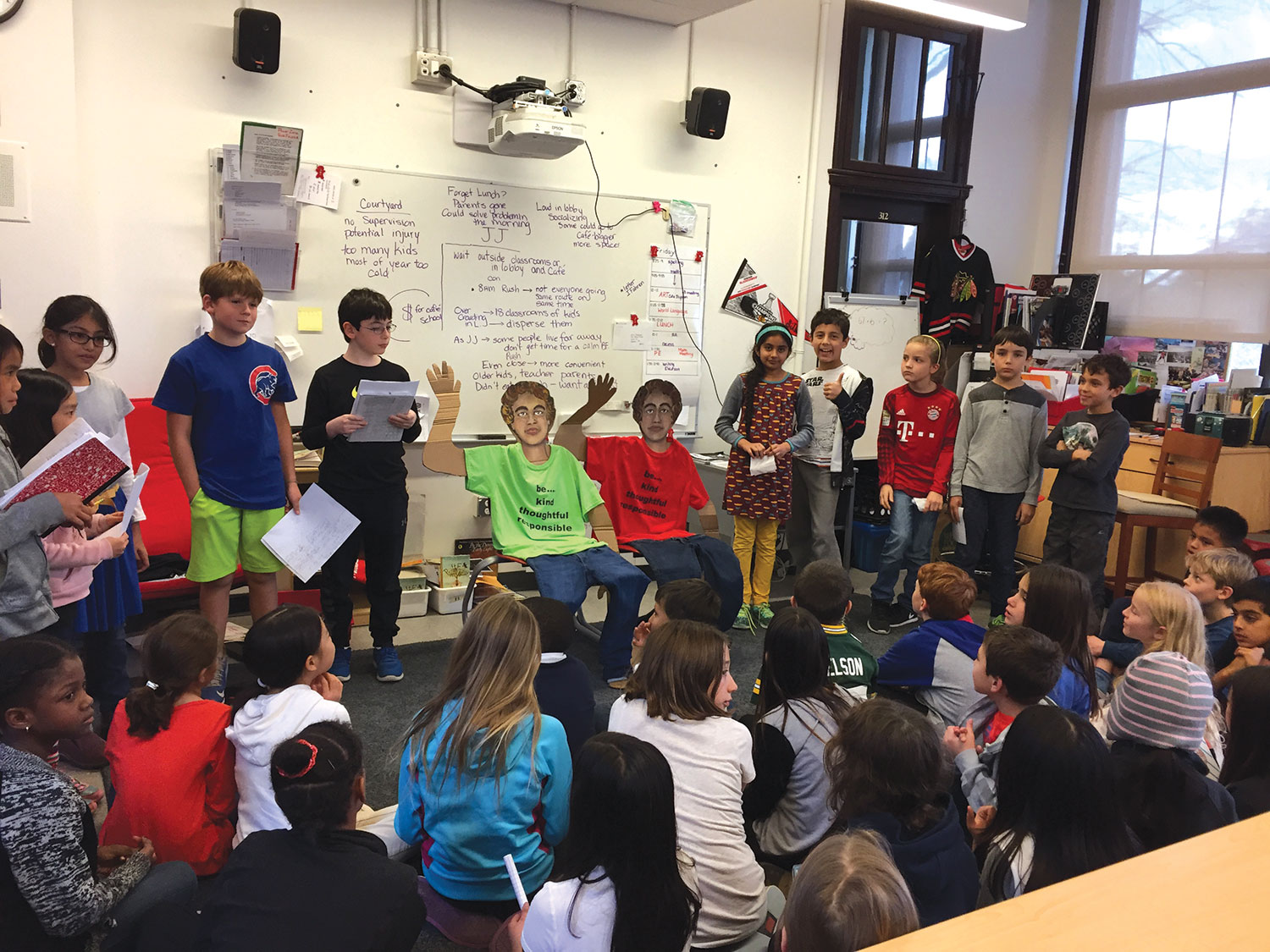 What would Dewey do?

The object of a democratic education is not merely to make an individual an intelligent participant in the life of his immediate group, but to bring the various groups into such constant interaction that no individual, no economic group, could presume to live independently of others.

—John Dewey, from Democracy and Education: An Introduction to the Philosophy of Education, 1916

John Dewey’s belief in experiential learning is widely known, but equally important to him was teaching students to take an active role in bettering their community. Throughout the Schools, Lab teachers work to achieve Dewey’s ideals.

For Dewey, says U-High English teacher Catie Bell, PhD’07, democracy was “a way of being in the world where you live cognizant of your contributions to others, where you can make a difference. And there’s this notion of a collective effort. You arrive at a purpose through conversation.”

Ms. Bell, who has taught at Lab for more than 30 years, decided to get a PhD after becoming interested in Dewey’s ideas on aesthetic education. That research prompted her to switch from social studies to English, and it also made her somewhat of an expert on Dewey in general. “Because it seemed relevant,” she says, “I went back and learned.” Each year she does a presentation for new teachers about Lab’s origins and Dewey’s philosophy. 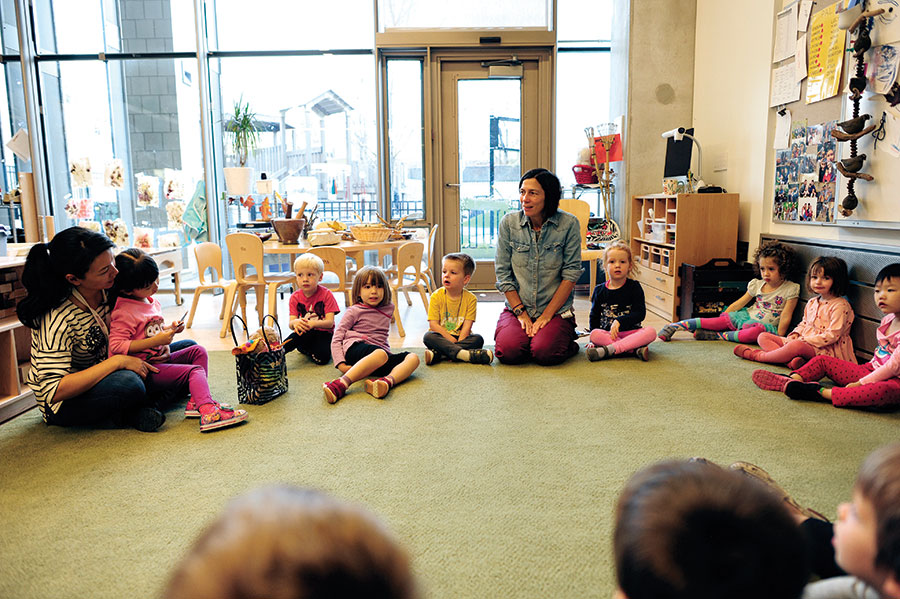 A Foundation of Community
It begins in Nursery School, where each class begins the day with a morning meeting. In Meredith Dodd’s classroom, she, her assistants, and a rotating student greeter shake the hands of every student who comes in. The meeting takes place in a breakout room, separate from the regular classroom, Ms. Dodd says, “so we can focus on each other and not have too many distractions. It’s the one time of day that we are all together in one place.”

After deep breathing and a morning greeting song, there’s business to be addressed: an overview of the day’s schedule and attendance. But even that task is far from routine: The teachers and students mention students who are not there as well as the ones who are, so that even if a student is absent, “you know you’re being thought of,” Ms. Dodd says.

Next, students can share items they’ve brought in—a flower, a fall leaf, an interesting rock—and answer questions their classmates might have about them.

“It’s all preparing for people to be aware of each other, to listen to each other,” Ms. Dodd says, “and the idea that all questions are relevant. One of the things I say is that meeting is democracy in our context. It’s an essential part of our being a member of our community.”

The meetings are a staple of progressive education, and Ms. Dodd also relates them to Quaker meetings: “the idea of coming into a welcoming place, a safe place. What you have at meeting kind of ripples out into the rest of the day.”

And beyond. In her nine years at Lab, Ms. Dodd often encounters former students who say they loved meeting.

Shared Ideas
Ms. Bell, who thinks the meetings are “crucial” to Dewey’s philosophy, introduced a standard practice in the High School humanities classes in line with Dewey’s ideas: the Harkness method, borrowed from Phillips Exeter Academy. The method focuses on discussion at a round table—called a Harkness Table—to encourage sharing ideas with minimal teacher involvement. Because students might take a while to acclimate to the idea that a teacher is not leading the discussion, teachers guide them in the early days. New Lab teachers receive training in the Harkness method each year.

“They really are working together,” Ms. Bell says, “and not worrying about intellectual property or who’s smarter, and creating a deeper understanding together.” 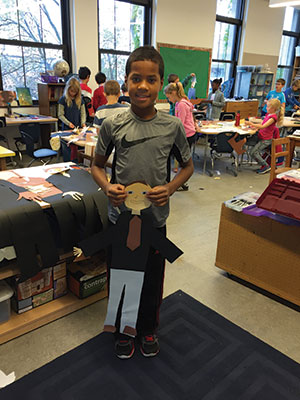 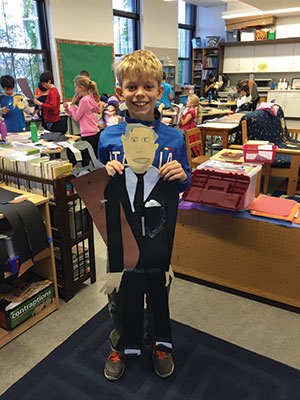 Defining “the People”
Dewey’s ideas on representation and community come through in the curriculum as well. Eighth-grade humanities teacher Joy Parham, in her first year at Lab, has already taken Dewey’s ideas to heart. In her class’s project on the US Constitution, students examined the preamble and discussed who “We the people” were in 1787 and who they are now. They also read President Barack Obama’s “More Perfect Union” speech during the 2008 presidential campaign, in which he said the goal was “to narrow that gap between the promise of our ideals and the reality of their time.”

Ms. Parham asked her class: What does the preamble mean today? What does it mean to establish justice? Provide for the common defense? Promote the general welfare? And so on, keeping in mind that “what that looks like to you might be different than me.”

As students got into the project, “I just fed off their energy,” Ms. Parham says, “and said, ‘Let’s include an art piece.’” Through poems, photo collages, paintings,and drawings, students presented their ideas of what the United States looks like today and how the preamble does or doesn’t live up to its ideals.

One student drew a sea of multicolored people around a red, white, and blue outline of the continental United States, with the words “We the People” emblazoned across it. Another made a collage of photos and newspaper clippings, interspersed with words including “election,” “immigration,” and “civil rights.”

“It really allowed students to open their minds to our differences,” she says, “and how those differences are important in moving our society forward.” 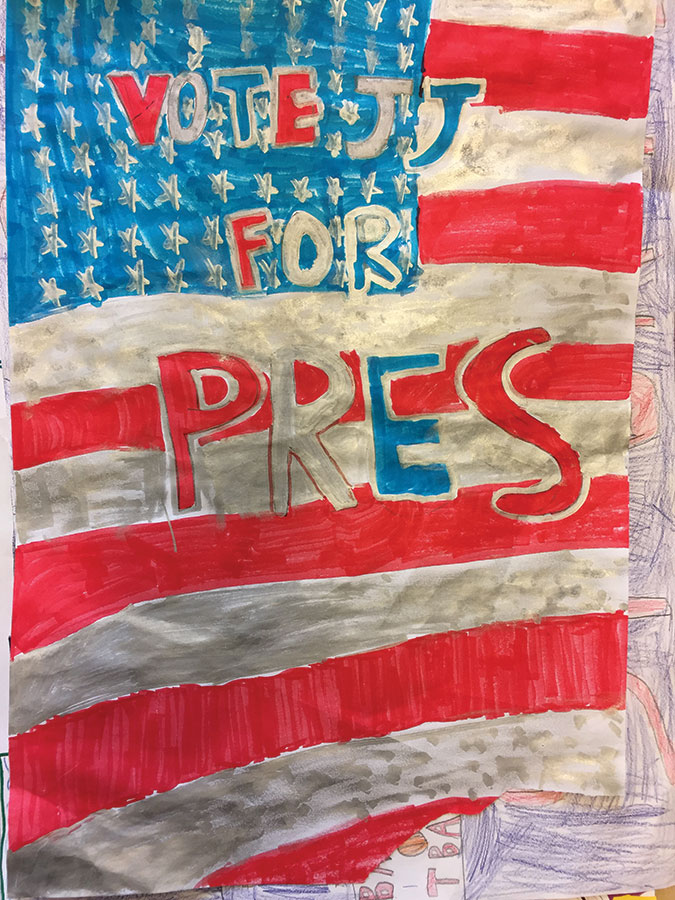 Democracy in Action
One of the most obvious ways to participate in democracy these days is to vote, but since that option is available only to the very few 18+ Lab students, years ago, fourth-grade teachers Nicole Power and Lisa Sukenic created a mock election. The entire Lower School chooses between two imaginary gender-neutral cardboard cutouts whose platforms focus on issues directly affecting Lower School students. Pat ran against Dana in the first election in 2004, Zoop took on Zeep in 2008, Toaster Brown and Raisin Jam squared off in 2012, and this year J. J. defeated C. T.

Ms. Power’s and Ms. Sukenic’s students created the candidates’ platforms by brainstorming topics of interest to them, including before-school supervision policies and school recycling. With platforms in place, students set to work for their candidates: drafting statements and speeches and organizing town hall meetings and debates. They wrote newspaper articles, polled other students, and graphed the results. Jessica Palumbo’s third-grade class interviewed candidates and created commercials that were shared digitally with the Lower School community.

Ms. Sukenic found it interesting to watch the students interact with the candidates “as if they were actual people.”

The teachers have found the election a powerful way to teach about researching candidates, understanding issues, and voting, all done experientially. If a teacher gives students “‘something to do, not something to learn,’” Ms. Sukenic says, quoting Dewey, “and the doing is of such a nature as to demand thinking, learning naturally results.”