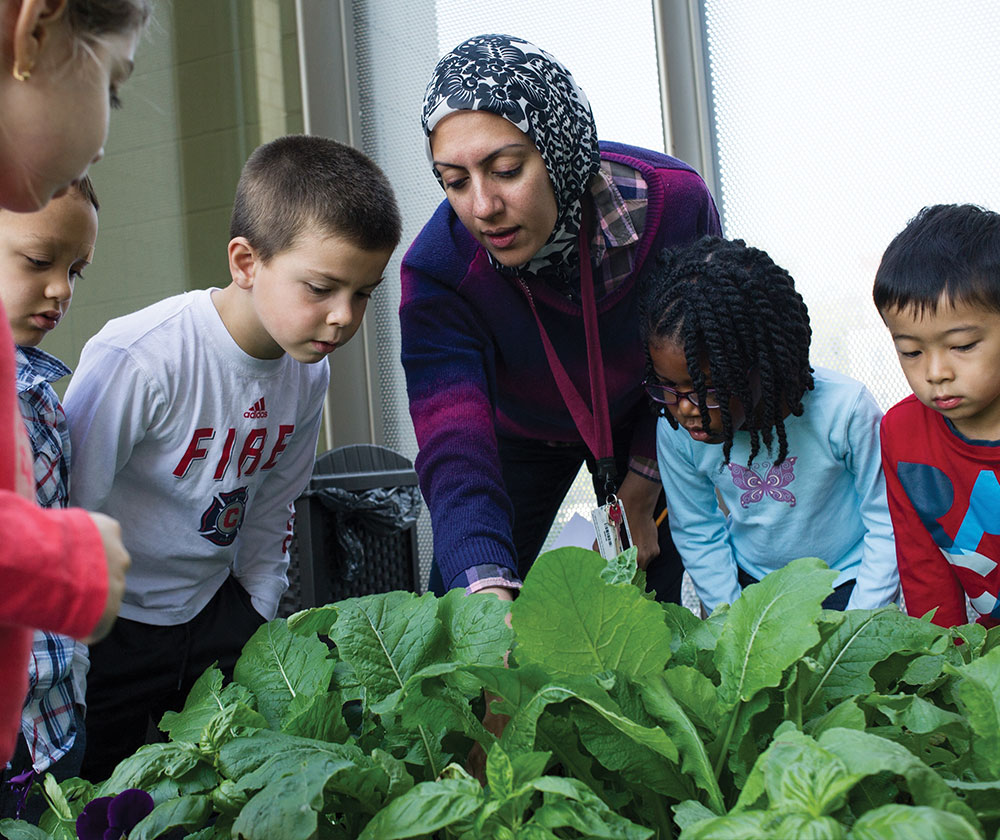 Learning to integrate faith into an overall sense of identity can be tricky, so it helps to have a support network. Lab Nursery/Kindergarten teacher Kiran Younus has been an essential part of that support network for many Muslim children in the Chicago area for the past decade—by running a special weekly after-school program and a two-week summer camp for children of Muslim faith.

“We want to supply children with tools to be articulate about who they are and their identity,” Ms. Younus says.

The summer camp features many typical camp activities: field trips, horseback riding, karate, the occasional cooking lesson and community service project. But it also has Arabic calligraphy and lessons about Islam and the varied cultures associated with the religion. Each year’s session has a theme lik “Muslim Contributions: Past and Present,” where students learned about Muslim inventors, scholars, and artists throughout history.

Ms. Younus started the after-school program for students who needed a place to learn about their faith and build friendships. They study verses and stories from the Qu’ran and talk about their meanings and values like kindness and honesty.

The daughter of Pakistani immigrants, Ms. Younus grew up in a small town southwest of Chicago, as part of the only Muslim (and only ethnic minority) family in the community. In 2005, she and some Muslim friends started a Montessori preschool for their children, called “River Garden,” committed to diversity, inclusivity, and a love of learning. They envisioned “a place where [the children] would feel comfortable and that would also reflect our vision of how education should be.”

As her children—now Labbies—got older, she discovered a lot of those values at Lab. River Garden’s focus shifted from its Montessori program to its summer camp, at American Islamic College in Lakeview, and the after-school program, in Hyde Park at the Chicago Theological Seminary.

With fellow Lab parent Noha El-Sharkawy-Aref’s help on the summer camp, Ms. Younus runs both programs and has hired local college and graduate students, including several from UChicago, to teach. A number of her children’s Lab friends also participate, a point of commonality that helps to build a more integrated sense of their identity.

“One of my goals,” she says, “is to help them build this authentic American Muslim identity where it’s not two different worlds.” As a child she regularly wore different clothing, spoke a different language, and ate different food at home than she did at school. She was delighted—and a little surprised—when one of her children asked to bring a traditional Pakistani dish to school for lunch.

Nowadays, a school lunch that looks different from their classmates’ is among the least of the challenges Muslim children face. An American Muslim identity can be fraught with misconceptions and stereotypes. The parents of River Garden students sometimes discuss anti-Muslim rhetoric and issues at their monthly meetings, especially when news stories create a media storm, Ms. Younus says, but in general they leave detailed discussions with children to the individual families.

As River Garden’s student group matures, Ms. Younus considers how its teachers may best equip the students to both deal with the unfortunate realities of extremist actions and to understand and respond to potential anti-Muslim sentiment. For now, River Garden’s aim is to cultivate confidence in the universal values and basic teachings of the faith, “helping give them a voice,” she says, “so that if someone says something inaccurate about our beliefs, they understand that it is not consistent with the religion as they have learned it.”

River Garden’s students come from different backgrounds: from Sunni, Shia, and mixed-faith families, and a range of ethnicities and socioeconomic groups. But, Ms. Younus says, “We are proud of our diversity and focus on our commonalities.”