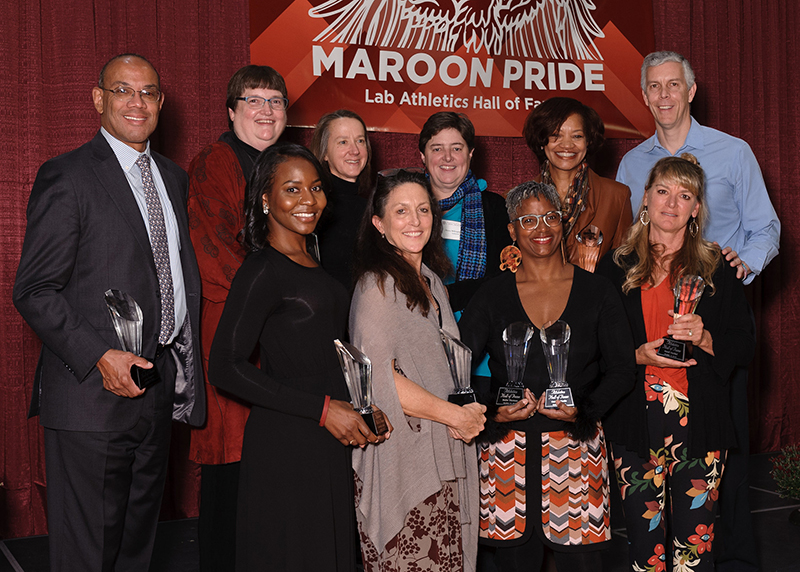 As a freshman, Marty Billingsley, '77, and her older sister Patty, '74, were not allowed to join the U-High track team—boys only they were told. The next year, while her sister had already graduated, things changed. Marty was able to join the team, whether due to Title IX or because, as Marty says, "maybe Lab was just catching up with the times." She credits that moment with a series of events that ultimately brought her to teaching and coaching and back to Lab.

On Saturday, October 19, before an audience of nearly 150 people, Marty shared her thoughts as she accepted her place among Lab's first Athletics Hall of Fame inductees. Lab established the Hall of Fame to honor outstanding athletics contributions and Lab's rich athletics history.

Nearly every one of the twelve inductees was present for the ceremony, some having traveled from as far as California. If you look at the record board in Kovler Gym, you will still see many of their names.

See photos of the ceremony and reception.

Learn more about the 2019 Inaugural Athletics Hall of Fame Recipients:

"Acceptance on the track team was so foundational because it gave me passion and confidence. Being accepted as a runner—not as a girl, not as a boy, but as a runner—on the team meant that I never ever thought I wasn't as good as everyone else," said Marty at the reception. "It meant that I didn't think it was any big deal to be one of the first three women smokejumpers in the country. It meant that it was easy to fit in as one of just a few women in a big software engineering lab. The U-High team's acceptance of me meant that I was never plagued by the sexist shackles that seem to hamper so many women. For that I thank U-High wholeheartedly."

Lab's athletics program has since substantially expanded. Today, nearly 65% of all Middle and High Schoolers play on at least one team, and Lab fields 56 teams in 19 different sports.