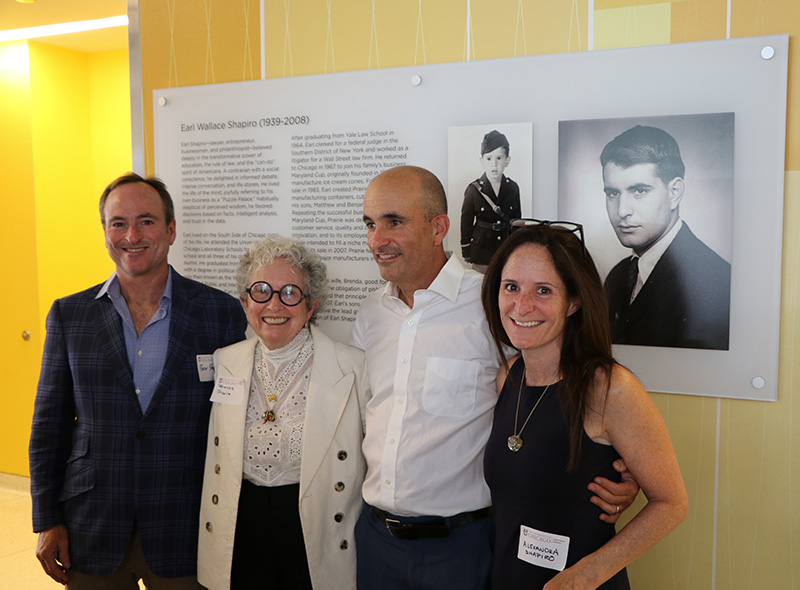 Commemorating the life and generosity of Earl Wallace Shapiro

On August 2, 2021, members of the Shapiro family gathered with interim director David Magill,  incoming director Tori Jueds, and Earl Shapiro Hall administrators for the unveiling of a plaque commemorating the life and generosity of Earl Wallace Shapiro (1939–2008). Earl and his wife Brenda, along with their three children, Alexandra, Matthew, and Benjamin, gave the lead gift for Earl Shapiro Hall, a gift that helped propel the Lab+ Campaign to its tremendously successful outcome of $80M raised to support the expansion and improvement of Lab’s two campuses.

Joining David Magill and Tori Jueds at the event were ESH principal Kelly Grimmett, assistant principal Sarah Abella, and members of the Shapiro family including Earl’s wife, children, and grandchildren, as well as his brother and sister-in-law and their family.

Offering a brief speech to the group, Magill read an excerpt from remarks he gave when the gift was announced, two weeks before Earl Shapiro’s death in 2008. These inspiring words of gratitude were:

We’ve read the press releases and the announcements that have been made about this particular act of generosity by the Shapiro family but all of them left out something that was of personal significance to me. This was a gift of love. A love of learning, a love of a city and University, a love of family, and a love of a man who represents the first generation of Shapiros to attend the Laboratory Schools. Thank you, Earl. Thank you, Shapiro family.

The plaque, featuring Shapiro as a boy and as a young man, resides at the back of the Earl Shapiro Lobby, and offers an engaging story of his life and his commitment to Lab and to philanthropy.