After graduating from Lab, Amanda attended Cornell University where she received her BArch in 1997. It was while visiting Cornell that she received the call from MacArthur alerting her that she had been named to the 2022 Class of MacArthur Fellows.

“It was quite a poetic moment to receive that sort of news while reminiscing about how my life had unfolded since I first arrived at Cornell 30 years ago,” said Williams.

Williams credits her Lab roots as one of the many influences that have shaped her career. “Imagination used to be centered at Lab,” she recalled. “It's critical that we return to an ethos in which possibility and risk are honored over grades and quantitative metrics. I know lots of Ivy League graduates who are miserable now, but I don't know lots of miserable dream chasers.” 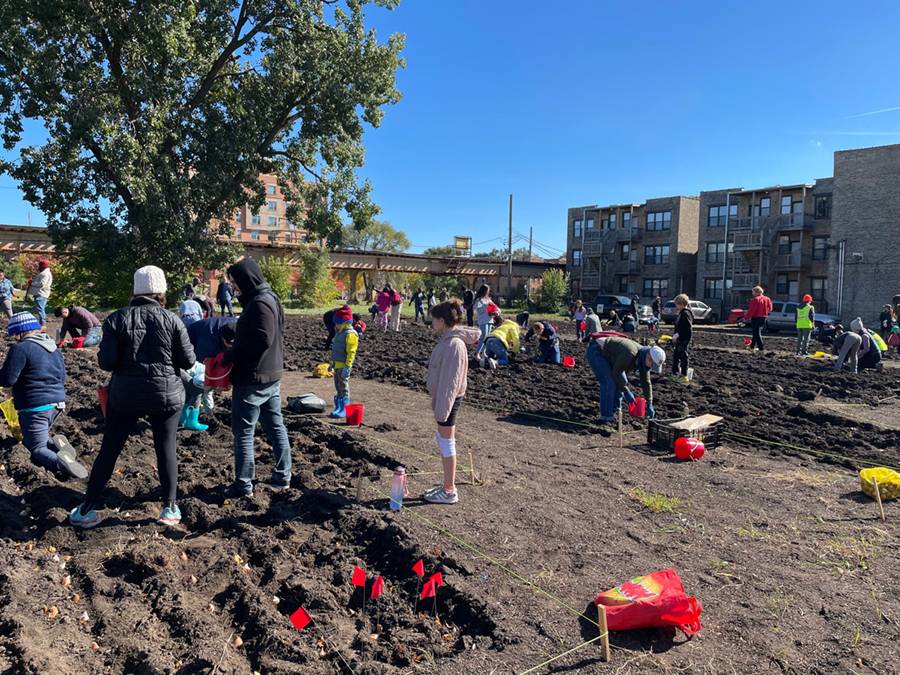 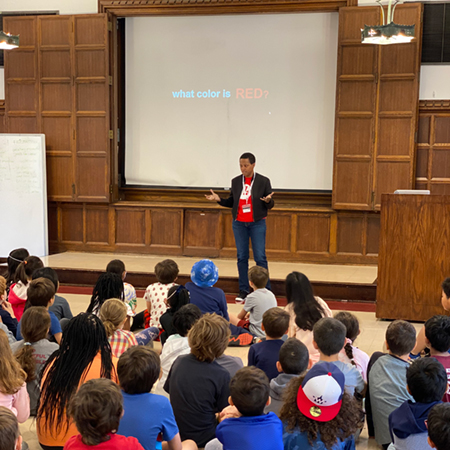 In the weeks preceding MacArthur’s announcement, Williams, who is also a current Lab parent, visited our Schools and explained to many of our Lower School students how she uses art to bring attention to issues on Chicago’s South Side, such as race and housing. During her presentation, she invited students to join her "Redefining Redlining" project. On Saturday, Oct. 15, Williams was joined by many Lab students as she led them in planting 100,000 tulip bulbs on South Side vacant lots to show the impact of redlining on Black communities in Chicago.

According to the MacArthur Foundation website, the Fellows Program awards unrestricted fellowships to talented individuals who have shown extraordinary originality and dedication in their creative pursuits and a marked capacity for self-direction. Three basic criteria are used to select MacArthur fellows: exceptional creativity; promise for important future advances based on a track record of significant accomplishments; and potential for the Fellowship to facilitate subsequent creative work.

The award, commonly known as the “genius grant,” carries a $800,000 stipend; a $125,000 increase from the former amount. Over a period of five years, the award is paid to the recipients in quarterly installments with “no strings attached” on how the money can be spent.

In addition to Williams, Tomeka Reid, an orchestra teacher at Lab from 2003–2011, was also named a MacArthur fellow. Reid is an American composer, improviser, cellist, curator, and, of course, educator. The Foundation recognized her eclectic approach at “forging a unique jazz sound that draws from a range of musical traditions and expanding the expressive possibilities of the cello in improvised music.”

When discussing how she hopes younger generations of Lab use their talents to impact society, Williams notes that “this generation of students—including my daughters—have inherited huge global burdens. They have to continue to center innovation and possibility no matter what their passion. They can't be afraid of failure. It all sounds so cliche, but no one makes an impact playing it safe or doing what is expected.”