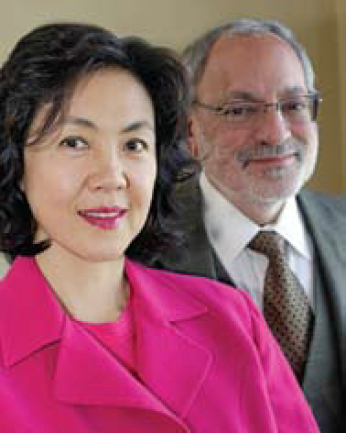 The ground was frozen—it was winter in Chicago after all—but the landscape at Lab's parcel of land on Stony Island Avenue was changing. Much already unfolded under the guise of the Lab+ Campaign: Blaine Hall had a new slate roof—no small thing. University management crews have overseen abatement work to ensure that the Stony Island site, in advance of demolition, is safe and poses no health or hazard concerns.

Helping move things along was a generous commitment by another Lab family. Ling Z. Markovitz and Michael C. Markovitz, AM'73, PhD'75, made a gift of $1 million to Lab—a significant gift that was further leveraged as a one-to-one match for most donations made to the Schools before June 30, 2011.

Michael and Ling's contribution was an important means of encouraging many other families to step forward to participate at whatever level they could. Listening to them tell their story, one can see a family that had been won over by the unique experience that is Lab.

The Markovitzes' daughter, Sarah Qing, was a sixth grader, at the time. But when they enrolled her at Lab as a nursery-schooler, the classroom experience came as a bit of a shock to these parents, who'd had very different educational experiences.

Mrs. Markovitz is the product of much more formal schools in Shanghai, and Mr. Markovitz grew up in one of New York City's strict parochial schools. But in daughter Sarah Qing's class "there was so much playing," says Mr. Markovitz. "We thought: if this wasn't Lab and the University of Chicago they wouldn't be able to get away with this."

It didn't take the Markovitzes long to see the benefits of Lab's Dewey and Reggio-based approach to early childhood education. "We saw that fostering a curiosity and love of learning in the children was an important part of the social development the school encouraged," says Mrs. Markovitz. "Our daughter loved going to school. And she was developing into a studious, conscientious, diligent, and motivated learner. We're sure not everyone has the same experience we've had, but we've met and spoken with enough parents to be able to say that our experience isn't unusual."

With their investment in the Schools, the Markovitzes felt they were spreading their excitement and their steadfast belief in the goals of the Lab+ Campaign. "An improved environment, arts, and early childhood facilities—these are important missions," said Mrs. Markovitz.

"And because many hands make light the load," added her husband, "we have set up our gift as a match to encourage others to join with us in developing this school we all care about so deeply."