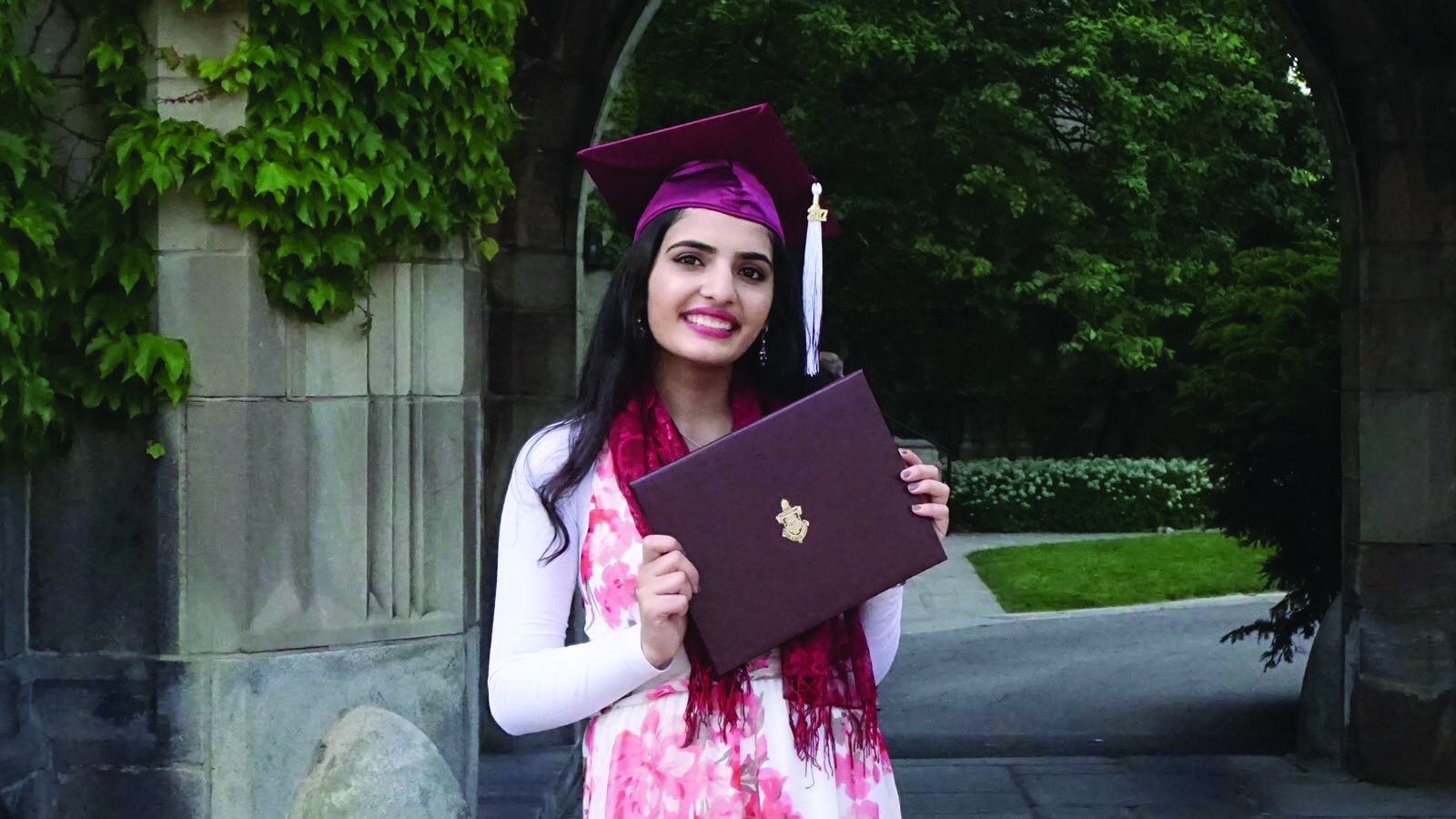 The Malone Scholars Program makes a Lab education possible. And the scholars make the most of Lab.

As a middle school student Myra Ziad, '17, approached the work of applying to high schools with enthusiasm but also trepidation. On top of worrying about simply getting an acceptance, she worried about her family's ability to afford independent school tuition.

"Lab was my top choice, but in the back of my mind I knew it wouldn't be possible because of the tuition," Ms. Ziad recalls. But when she opened the envelope from Lab, she found not only an acceptance letter, but also a letter from the Malone Family Foundation offering her a full merit scholarship through their Malone Scholars Program. "I thought it was a prank or a scam. I started crying. My mom and dad started tearing up. I felt like a billion doors opened for me."

Lab's partnership with the Malone Foundation has made it possible for outstanding students of limited financial means to benefit from, and enhance, the U-High experience. These are students with stellar academic performance, above-and-beyond work ethic, and deep thirst for knowledge.

"Malone Scholars are top-tier," explains Irene Reed, executive director of admissions and financial aid at Lab. "To think about them going to another school would be a huge loss for our students and our institution." She said the Malone Scholars Program has been a tremendous force for recruiting outstanding students.

A special place
For more than a decade the Malone Foundation's executive director traveled to more than 10 schools every year in search of the most enriching learning environments in the country. Lab was chosen as one of 50 schools nationwide to partner with the Malone Scholars Program.

Each partner school is entrusted with a $2 million endowment to fund Malone Scholarships for students in the top five percent of their national class who qualify for financial aid for at least 30 percent of their tuition.

"Lab is a special place," the Malone executive director said. "I visited a few other schools in Illinois, and there was no question in my mind that Lab was absolutely the best. The education these kids were getting and the warmth of the place were among the highest I found anywhere in the country." She was moved by students' outspoken love for their school and impressed by the wealth of academic and extracurricular programs available for a broad range of interests. 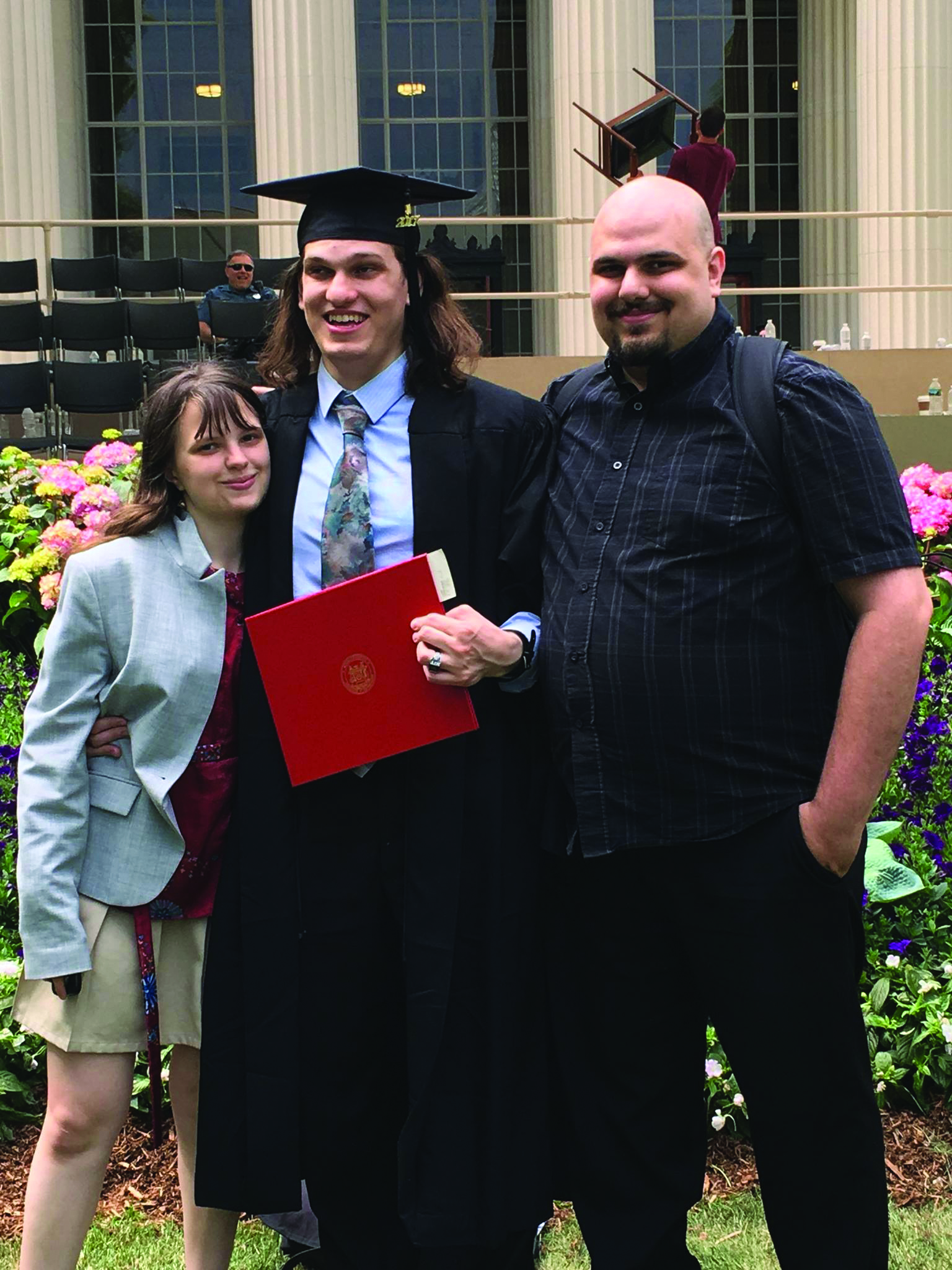 Lane Gunderman, '13, his sister, Hazel Martello, '17, and Ms. Ziad believe that a Lab education is not to be taken for granted. The Malone Scholars Program placed that privilege within reach and inspired them to make the most of it.

"I was very excited about Lab," Mr. Gunderman said. "I was able to do research during some summers in high school (something that I doubt I could have done at another school as easily), take classes at UChicago, and take very well-taught and challenging courses in nearly every subject."

As a finalist in the 2013 Intel Science Talent Search, Mr. Gunderman traveled to Washington, DC, to present the Summer Link research project he worked on with UChicago Associate Professor of Chemistry Greg Engel. And he dove in deep at Lab joining the Math, Science, Linguistics, and Scholastic Bowl teams, too. ("I guess I also helped form the Latin club," he adds.)

Mr. Gunderman graduated from the Massachusetts Institute of Technology, where he double majored in physics and math.

Though their interests differed, with Ms. Martello focusing her time on Certamen and Ethics bowl, Lab made a lasting impact on the life trajectories of both siblings. This summer, her second as part of the Internship for Civic Engagement, Ms. Martello added leadership responsibilities for the program as a senior intern working with Alderman Sophia King.

Malone Scholars don't just have great grades. Often these kids shine in the admissions process despite having overcome some pretty serious obstacles in their personal lives.

Ms. Martello currently attends the University of Chicago. "I'm still unsure what I'd like to do after college, but hopefully something with international law or politics."

Ms. Ziad developed an early interest in neuroscience, which she began to pursue during her sophomore year at Lab. She presented her research on brain injury and memory loss at the National Junior Science and Humanities Symposium in San Diego, and completed several Summer Link research projects with UChicago faculty while at U-High.

One research project, in partnership with the Brain Surgery Institute paired Ms. Ziad with Dr. David M. Frim, chief of neurosurgery at University of Chicago Medicine. As part of her work, she created microscope slides out of brain sections less than two millimeters in size. Each section had to be perfectly flat, requiring a great deal of care and precision―much like neurosurgery itself.

"Not many high school students get that opportunity," she said. "But I took each opportunity and made the most of it, because not everyone gets to go to Lab, and I had the privilege to be a part of this community that's unlike any other."

Ms. Ziad currently attends the University of Michigan where she is a member of the Weisman Lab in the Life Sciences Institute as part of her pre-med track, and to explore other subjects as well.

One life at a time
In the mid-1950s, worried about her son, Dr. John C. Malone's mother went to the nearby New Haven Grammar School to ask if they would consider a work scholarship for her son. They did and Malone went on to study electrical engineering and economics at Yale University, earn a master's and PhD from Johns Hopkins University, and eventually build a multibillion-dollar fortune in the cable television industry.

Malone credits his success to the challenging, engaging education he experienced early in life. He established the Malone Family Foundation in 1997 to offer the same opportunity for students. The foundation's ultimate goal is to provide an outstanding education to every student in the top five percent of their national class.

Said Ms. Martello, "I came to Lab uncertain of my capabilities and of my future, but Lab helped me nourish my ambitions and reach my potential. After six years of hard work, not only on my end, but of my teachers, friends, family, and support system, I am looking onto a bright future."

"Eventually I believe that the Malone Scholars Program will change the world," the Malone executive director said. "The first Malone Scholars only graduated in 2004, but they're already out doing great things. We're still in our infancy, and it's a perpetual program, so I think it's going to make a big difference."

Making the world a better place is no small feat. But Lab's Malone Scholars seem poised to help.