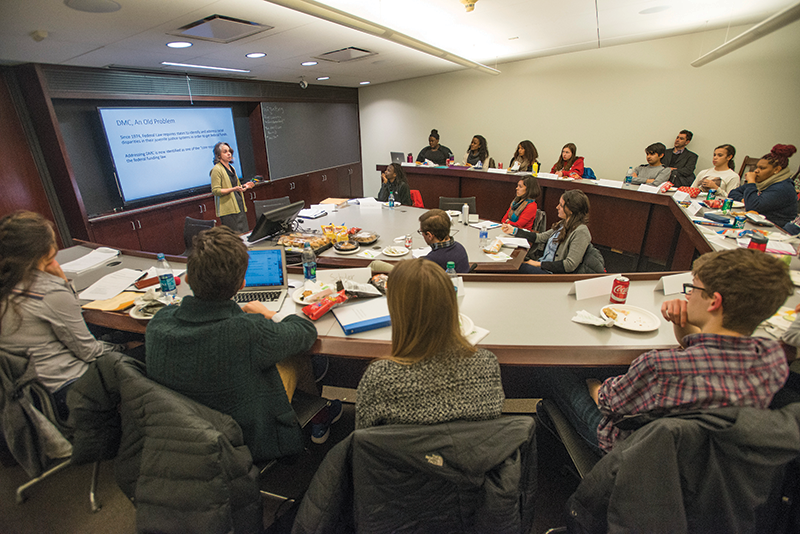 The students in the University of Chicago Law School's Charles Evans Hughes Seminar Room might be any law class: chatting as they settle into seats, pulling out reading packets, finishing bags of chips. In fact, it takes a few minutes to distinguish the Law School students, serving as TAs, from the dozen or so high school students in Professor Emily Buss's Juvenile Justice Seminar. The seminar is a version of the one she teaches law students, adapted for students from U-High and UChicago's Woodlawn Charter.

One night the topic was "Disproportionate Minority Contact: Race and the role it plays in the system." Professor Buss's lecture hits the highlights from the reading assignment, including the fact that from 2002 to 2004, while African Americans represented 16 percent of minors in the United States, they accounted for 28 percent of juvenile arrests, 37 percent of detained youth, and 58 percent of juveniles incarcerated in adult prisons.

These statistics raise questions: Why the discrepancy? What, if anything, can society do to change it? When does it start? What role do different types of schools play in this system—not just in terms of the opportunities they provide, but in terms of disciplinary procedures and even police presence?

Before dismissing the students to discuss in three groups facilitated by the TAs, Professor Buss tells them, "It's a problem, and we haven't figured out how to solve it. So it's up to you all."

Having students from the two schools working together was exactly what Professor Buss, the Mark and Barbara Fried Professor of Law, envisioned when she proposed the class. Of the 15 students enrolled, eight are from U-High and seven from UChicago's Woodlawn Charter high school. The two schools hope collaborations like this will continue as a result of the partnership between Lab, UChicago Charter Schools, and funding by the Lim family, who have connections to both schools.

The partnership brings together two schools that in many ways are farther apart than the one mile of geographic distance between them. Lab is a storied independent school; the Woodlawn campus is a relatively new public charter. Many Lab families live quite comfortably; UChicago Charter serves many students from underserved neighborhoods. Most Lab parents have college degrees, and many are on the University of Chicago faculty; many UChicago Charter students are striving to become the first members of their families to graduate college.

In some ways, though, they're not so different. Students at both schools share a desire to learn. And the schools share a commitment to provide their students with meaningful, broad, and powerful learning experiences that enable them to succeed in college and in life.

The two schools also share a connection to the University of Chicago. Lab was founded by UChicago's John Dewey in 1896. More than a century later, in 1998, as an outgrowth of its work in education research through the UChicago Consortium on Chicago School Research, the University founded the North Kenwood/Oakland Campus of the charter school, serving grades N–8. The Woodlawn Campus, serving grades 6–12, opened in 2006. Today the charter school is part of the University's Urban Education Institute (UEI), the mission of which is to create knowledge to produce reliably excellent urban schooling.

The UChicago connection, along with a gift from Lab parents Peggy and Yung Bong Lim, made the partnership possible. The gift will fund internships and stipends for University faculty teaching classes. It will also support a director of partnerships at UChicago Charter, who will work with Lab's manager for special projects and school outreach to develop additional collaborative programming between the schools.

A former member of both Lab's board of directors and the UEI Partners Committee, which supports UChicago Charter Schools, Peggy Lim sees the partnership as an opportunity to let Lab students step outside their own worlds: "to truly have a deep and meaningful relationship, and truly be a laboratory school."

"There is a wealth of opportunities within our very own community for students of these two schools to learn from each other," she says.

The idea particularly resonates with the Lims as their sons grow older and become more aware of social justice issues. Ms. Lim had been interested in developing a closer relationship between the two schools since first getting involved with UEI in 2010. Others had the same idea, and Lab and UChicago Charter began to collaborate informally.

The schools have co-hosted a Day with the Deans, during which deans of admissions from highly selective universities and colleges across the country visit to meet with U-High and UChicago Charter juniors and seniors. Students, parents, faculty, and staff at both schools have joined forces for community service activities, including a book drive, tutoring programs, and an outdoor cleanup project.

With all these other programs, the Lims are reluctant to take credit for the partnership. "We're honored to be part of this exciting effort," Ms. Lim says, "and we hope others will join us."

Back in the seminar room, the high school students, some still munching on Subway sandwiches, cookies, and chips provided by Professor Buss, break into their groups, each facilitated by two TAs. The students have clearly done the reading, and the discussions, centered on their personal experiences and opinions, are impassioned.

One group contrasts at length the disciplinary philosophies at Lab and UChicago Charter. An African American student from UChicago Charter says her school's strict rules serve a purpose: "We're always going to have a more severe punishment. So why not just teach us now?"

The conversation continues when the full group convenes at the end of class, segueing into a comparison of the vastly different penalties for drug use and possession at the two schools that the students have observed. The students become so engrossed in the discussion that several ask to stay past the 8 p.m. end time.

The discussions are Professor Buss's favorite part of the class, and in certain ways she thinks they are better than those in her Law School classes, "because they're less guarded."

"By the time we're in law school, we learn what's OK to say and what's not OK to say—and that's important, but sometimes it gets in the way."

The Lims hope the partnership continues to grow—and not just between the two schools. They share Lab and UEI's hope that it may eventually serve as a model for schools in other cities.

The students don't solve the problem of disproportionate minority contact that night. But all 15 course evaluations say the students learned a lot, enjoyed meeting peers from the other school, and were glad they took the course.