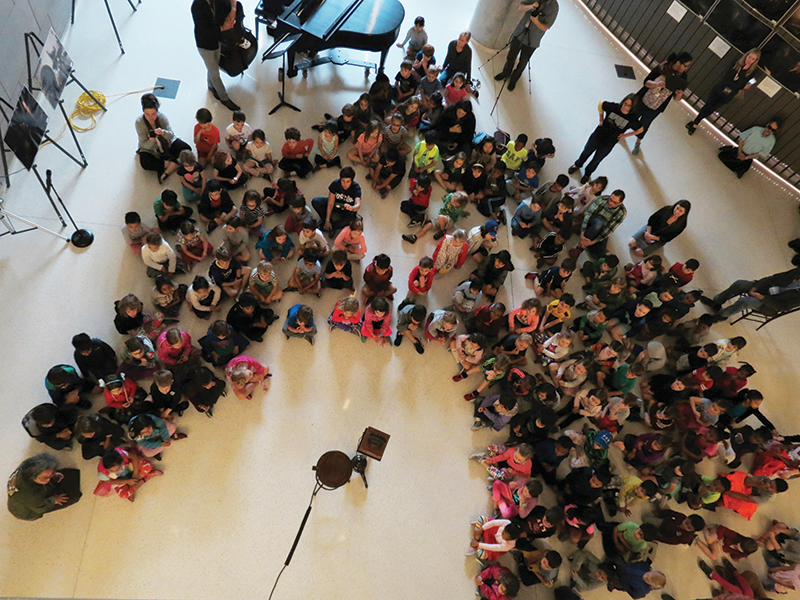 Allison McGourty and Bernard MacMahon, creators, writers, producers, and directors of a multi-part BBC/PBS documentary, American Epic, that explores the birth of the recording industry, served as Lab’s inaugural Kistenbroker Artists in Residence. Lab spent the past year working with them to help shape a curriculum to go with the documentary as it is used as a teaching tool at schools across the country. At the 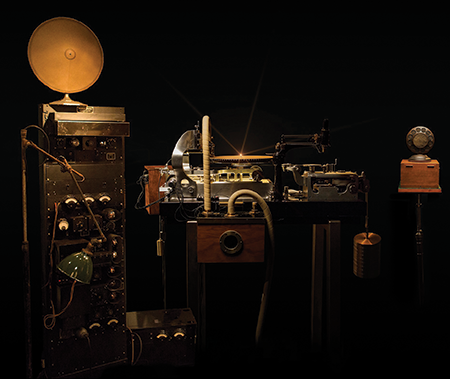 end of May, during their final visit to Lab they brought a special “guest,” the original 1920s Western Electric recording system—the only one still in existence—used in the American Epic films, and which allowed the music industry as we know it to come into existence.

Engineer Nicholas Bergh, who pieced together the machine over a ten-year labor of love, personally drove the parts from California and re-built the machine in Lab’s Corvus Gallery. Mr. Bergh then “produced” student recording sessions. This was the first time the machine has “traveled” and no one else—save for the musicians recorded for the documentary (and helped by Jack White and T Bone Burnett)—has ever recorded on it.

Students of all ages shared their art and practice, from Middle and High School spoken word artists, to a U-High jazz trio. On the last day of the Lab sessions, 125 kindergarten students sat on the floor of the Gordon Parks Arts Hall John Rogers lobby, surrounding an antique microphone, sang (and signed!) the hopeful classic, What a Wonderful World. They may not have sung the same words at the same time, but they succeed in just one take.

In all, Labbies made more than 40 recordings, which Mr. Bergh will take back to his studio and return in a digitized format.

“You have to remember that we are recording on equipment that is almost 90 years old,” Mr. Bergh told an audience of Lower School students during one of more than a two dozen classroom experiences held in the Corvus Gallery. Duke Erikson, an American Epic writer and producer assisting Mr. Bergh in the gallery-turned-studio, says, “seeing student reactions, listening to their great questions, and observing the looks on their faces when they hear themselves” on vinyl makes this form of sharing American history rewarding. He notes that Labbies have a level of curiosity he has not before experienced.

“We wanted to make sure that the American Epic experience was available to the entire Lab community,” said Music Department Chair Roz Torto. In addition to the historic arrival, and use, of the Western Electric recording system, staff and faculty had their first “guitar social” with musicians from the Old Town School of Folk Music, and the week culminated with a concert by multi-instrumentalist and American Epic session artist, Hubby Jenkins.

The Laboratory Schools are uniquely positioned to facilitate these types of integrative, multisensory experiences steeped in hands-on, real world pedagogy.

Mr. MacMahon was moved by essays Lab students wrote about the Hopi tribe featured in the film: “The music of families in the 1920s has been passed on to a new generation here at Lab. The opportunity to interact with history—through the machine that allowed America to hear itself for the first time—these ideas that are being nurtured could expand to other classrooms across America.”

Says Ms. Torto, “By working side-by-side with leading artistic practitioners, our students and our faculty benefit. It is absolutely consistent with how John Dewey envisioned a community of learners.”

“This was a catalyst for work that we’ve always wanted to do…speaking about folk music, the blues, underrepresented constituencies of musicians and people in general. We’ve had a lot of genuine moments of community where music is not an accessory but a central part of the experience,” she concludes.