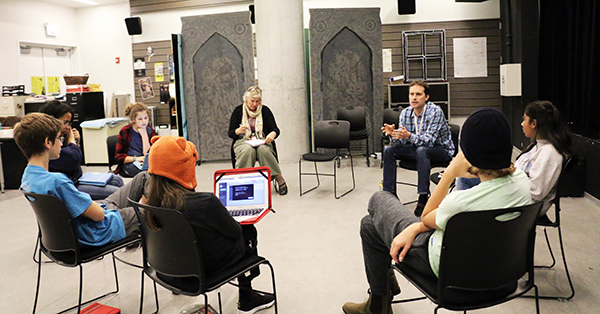 A group of Middle Schoolers collaborates with some accomplished (Lab parent) playwrights as they try their hand at the genre. It's not part of a class, but a seminar period that allows time for student-driven learning. Hearing students talk about writing or knowing they had done some on their, the theatre arts teacher invites professionals to help guide the way:

With the help of the visiting playwrights, the students start to unpack their ideas.

Mr. Dohrn asks the students to really think about what their characters want. Mr. Nakas has the students create characters—one based on a thing the student loves and one that the student fears. As each writer offers prompts, the students become more and more comfortable sharing their work with one another and connecting over their common interest.