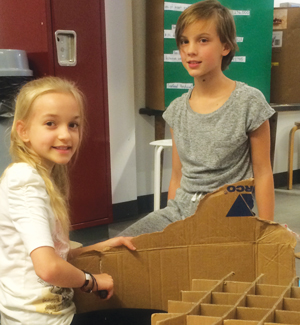 Think cardboard pandemonium: games like ping-pong and foosball shaped with scissors, tape, glue, and ingenuity. Whack-a-mole propelled by a student manually pushing the "moles" up through holes cut into a cardboard box. And plenty of cardboard forts.

The Lower School participates in the Global Cardboard Challenge, which encourages kids to build anything they can think of using cardboard and everyday items. An activity like this allows students to show their potential in unexpected ways and providing kids with the opportunities to play with simple materials and to work with their hands encourages imagination and open

One student builds a vending machine with different compartments. Pull a string and the item falls forward into the dispenser. A foosball table uses little green army men as the players. Creators of an air hockey game cover the cardboard table with clear packing tape to give it a smooth surface.

A nine-year-old boy named Caine Monroy, inspired the Cardboard Challenge after he built a cardboard arcade in his father's used auto parts shop in 2011. His first customer happened to be a filmmaker, who was so taken by Caine's ingenuity that he created a documentary and organized a flash mob of customers for a day. The short film went viral and sparked an annual global day of cardboard-centric play on October 1.

Lab's students are now among the 750,000 kids in 70 countries who have participated. And Lab parents, faculty, and administrators, as well as students from across the schools get to stop in to observe and play with what gets fashioned from three-quarters of a mile of cardboard.