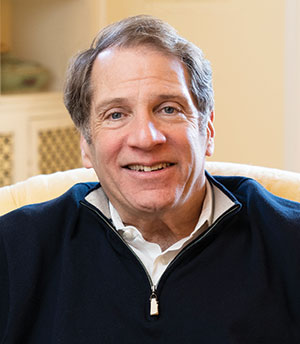 "I find myself in a very unusual circumstance," said Peter Kovler, '69. "My job is to do the best I can."

The chairman of the board of the Judy and Peter Blum Kovler Foundation and the founder of the Marjorie Kovler Center for Survivors of Torture, Mr. Kovler describes his life in philanthropy as the result of a series of accidents, starting with being born into a family that started a foundation. So when he was in his late 20s, he left his career as a journalist and transitioned to giving all his attention to the Kovler Foundation.

"Maybe it's just a common decision, but I think that if you're in a particular circumstance and you have a chance to help people who are underrepresented, you should take advantage of that opportunity," he said.

This stance is an extension of, rather than a break from, his time as a reporter, during which he penned op-eds for The New York Times about the need for humanitarian policy in Southeast Asia and produced three documentaries about world events. One of those documentaries, Hotel Terminus: The Life and Times of Klaus Barbie, won an Academy Award in 1988 for its portrayal of a Nazi criminal who oversaw the occupation in Lyon, France.

"He played a principal part in the murder of so many people, particularly Jewish children. It's the anatomy of a cruel person who is the personification of evil," said Mr. Kovler.

On the philanthropy side, he still works on projects that aren't the best "dinner table conversation," such as the foundation's work supporting research into pancreatic cancer—which both his mother and grandfather died from—and helping survivors of torture. Other projects are easier to discuss, he says, pointing to their steadfast support of culturally important civic spaces like the Franklin Delano Roosevelt Memorial, an exhibition about Emmett Till at the Smithsonian's National Museum of African American History and Culture, the United States Holocaust Memorial Museum, the Barack Obama Presidential Center, and the new Statue of Liberty Museum that will open on Liberty Island in May 2019.

"This latest effort is a way to focus on how immigration is such an important part of what this country is, and how we should be welcoming to immigrants and not tolerate hostility toward them," said Mr. Kovler. "I hope it will play one part in persuading this country to be humane to people who want to move here, and that it captures the public's imagination."