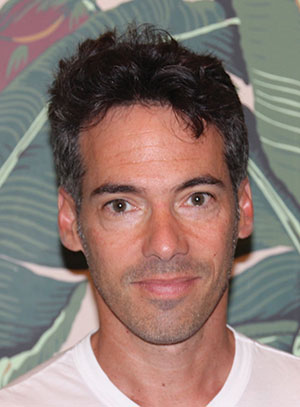 Aaron Lubin, '88, wants you to know that you don't have to win the lottery to have a career in the arts.

"I thought that having a career in the movie business was as realistic as me being in the NBA. I assumed only the most connected people had opportunities, but it was a false assumption," says Mr. Lubin, who has been a film and television producer for 19 years.

Mr. Lubin, a "lifer" at Lab, fell in love with writing while working on the U-High Midway, of which he was eventually editor-in-chief. While he had a hunch he wanted to work in the movie business, he thought his best bet was to take an indirect approach: become a lawyer and work on the business, rather than the creative side.

But it was during law school at Loyola in Los Angeles that he realized he wanted to be a storyteller, not a dealmaker. He did a spate of internships at local studios and agencies, and after graduating he landed an entry-level job as an agentís assistant. Through a series of connections, he managed to parlay this experience into an interview with actor, writer, and director Ed Burns. The two quickly became partners, sharing a similar vision for the kinds of stories they wanted to tell.

Since 1999, together Mr. Lubin and Ms. Burns have made a dozen movies, as well as a TV series: Public Morals, which is set in 1960s New York City and explores the public morals division of the New York Police Department.

"We get to explore Irish gangsters and the culture in Hell's Kitchen. It's wonderful to get to play around with the things that inspired me, like Scorsese films, and reference them," says Mr. Lubin.

For each project that comes to fruition, there are many more that fail. He likened movies to start-up companies that face enormous odds. "The default position of anyone financing anything is to say, "no," he cautions.

His latest goal is to turn a book, Gang Leader for a Day, into a TV show. Written by Sudhir Venkatesh, AM'92, PhD'97, the book explores the challenges for residents of the Robert Taylor Homes. The project is currently in development with AMC (of Mad Men and Breaking Bad fame), and Mr. Lubin hopes it becomes one of the few ideas that overcomes the odds.