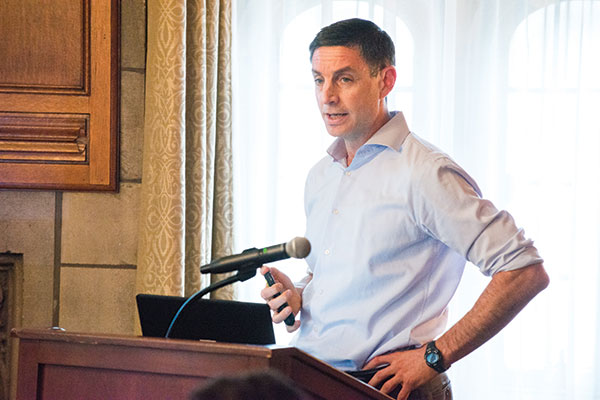 "I was certain when I arrived at Lab in the ninth grade that, despite being five feet three-and-a-half inches tall, an NBA career was ahead of me," quipped Mr. Greenstone, director of the Becker Friedman Institute. "But the world was broader. Lab helped open my eyes to that."

The Milton Friedman Professor in Economics at the University of Chicago credits Lab with giving him a solid foundation in how to think clearly and linearly about problems. When he was a U-high junior, he took history with Earl Bell. He clearly remembers the moment he figured out how to construct a paragraph with a sharp topic sentence, and it was as if a light went on.

"I realized, oh my goodness, I could make all my paragraphs like that one."

This revelation—that learning opens doors to better understand the world—had a lasting impact on Mr. Greenstone. In college, he found that economics offered a clear way to think about the world and the tradeoffs that people in societies face. While he is broadly interested in the role of government in society, he is focused on finding solutions to the global energy challenge.

"Access to inexpensive and reliable energy is critical for advancing living standards, but the least expensive forms of energy come bundled with air pollution that shortens people's lives and greenhouse gas emissions that increase the odds of destructive climate change," he says. "How to balance the goals of economic growth and environmental quality is the challenge."

In 2014, Mr. Greenstone and colleagues partnered with the government in Gujarat, the most industrialized state in India, to reduce industrial pollution. They devised an incentive structure to entice local environmental auditors to be honest about plant pollution. The state adopted the reforms he and his team outlined as policy, which resulted in reducing pollution by 30 percent.

Now he's working to understand the economic consequences of climate change, with a focus on the energy needs of developing countries.

"The most exciting problems are finding the areas where governments can successfully intervene in markets to improve our well-being—that is where it is possible to make a difference in people's lives."