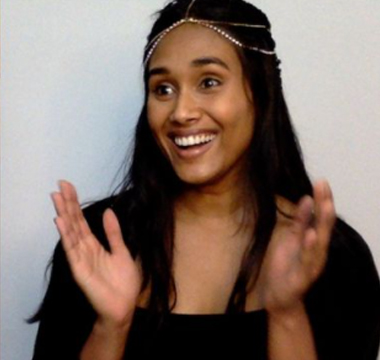 U-Higher Aisha Ziad won one of three top prizes in Pegasus Theatre's 34th annual Young Playwrights Festival for A Lady's Facade, a play about a fine arts historian and curator who uncovers a secret behind the "Mona Lisa" that could change history. "In this play, I wanted to intertwine reality with my own imagination," Ziad says, where curiosity met creativity through research and writing.

"I've always been fascinated by the woman behind the painting and her relationship to Leonardo da Vinci," Ziad said in an interview with Hyde Park Herald earlier this year. "The play interweaves the artist's time and our own, and they come together at the end."

Assigned in Analysis and Composition by teacher Christine Himmelfarb, students were all required to submit plays to the Young Playwrights Festival. With help from teachers in the Writer's Center, Ziad received feedback in refining the flow of the story. With much of the story taking place in the 1500s, Ziad said that writing the dialogue obliged her to take on a completely new way of speaking. "We also had plenty of class time to read to other students and edit together, and after the first round of judging, Pegasus invited me to an editing workshop, which was very useful," she said.

In addition, Leland Culver, '20 who, on his own, submitted his play The Watcher of the Eternal Flame was also a finalist in the competition.

Two other Lab students received honorable mention this year including Veronica Godina, A Beautiful Day, with teacher Christine Himmelfarb and Isha Nayak, It's Not Always Fair, with teacher Rachel Nielsen.