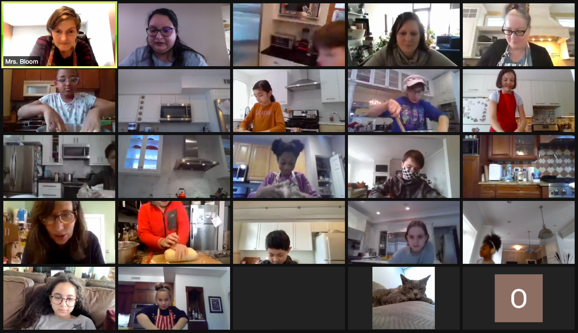 A slice of life—and bread!

Diane Bloom started making bread with her fifth graders nearly a decade ago in 2012. "At the time, my inspiration was 'breaking bread together,' I needed something to unify a class," says Bloom. "I always endeavor to bring life skills and experiences into the classroom and widen children's experiences and empower them. Plus, baking with children is a classic hands-on way to incorporate literacy and numeracy into something that is fun." In person, students make bread in pairs or trios on a weekly basis using a fleet of bread machines. "The students get a chance to serve their classmates and prepare something for others. Some years we've made an extra loaf and shared it with other faculty and staff or another class down the hall." 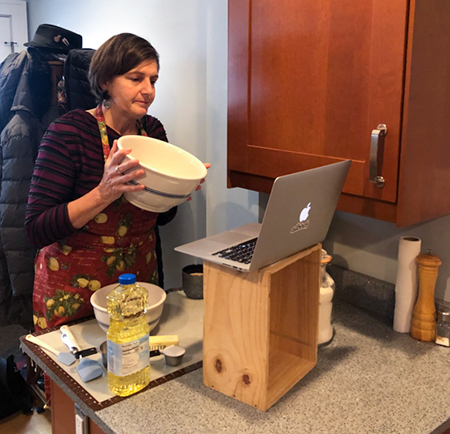 "Most Bloom kids know, some weeks it might work out to be a brick, other times it will be a delightful loaf. The opportunity to be kind and empathetic to a group whose bread flopped dovetails over time with those kids who make a loaf that is more buttery than another—ostensibly made with the same ingredients. Sometimes this is followed up with a butter making lesson, and often bread making comes with some basic chemistry and research."

"The breadmaking was pretty dormant thanks to remote learning," but as Ms. Bloom says, "One's reputation doesn't take a rest during a pandemic. One of the first questions during the first week was, 'Will we make bread?' That has lingered with me during the long months since September. Plus I have a couple of siblings of past Bloom students and the references about bread have arisen. So, during the last few weeks I activated a plan. I searched for recipes that were kid friendly and low tech. Heaven knows, I needed less tech for this activity. This required ten minutes of hand kneading. Perfect work for homebound fifth graders. Throughout this year I have periodically mailed a tangible piece of mail to the students. The lastest was a packet of yeast which conveniently had a fraction on the packet—tying things into math! And we worked on vocabulary and research to understand the recipe. Many kids were stunned that I would mail them a packet of fungus."

Although she had originally planned to bake in small groups, with the announcement of a return to campus she made the call to go for it as a whole class activity. "Having something that felt fun, energetic, and entertaining would be worth the attempt—and the experience was so validating. Kids who have been thriving in remote-land were engaged and enthusiastic. Plus some of the super quiet kids, who have hidden behind screen savers or been super quiet were vocal and engaged. The smiles abounded. It was fantastic to see. It was bittersweet, because I know there were some kids for whom this was stressful: pacing, inexperience, etc."

"My big take away? Hands on education is vital. It is delicious. It is necessary. It can't be squished down into curricular areas. It's addressing the whole; whole child, whole experience."